For detection of coliform bacteria including Escherichia coli

Coliforms including Escherichia coli are used as primary indicators of faecal contamination in water and food industries. Their presence and enumeration in samples is used as an index of the presence of faecal matter and is indicative of the possible presence of enteric pathogens. Escherichia coli are also the most common pathogen in urinary tract infections. Coliform bacteria (capable of fermenting lactose) grown on this agar produce bright red colonies within 24-48 hours of incubation at 37°C. The red-coloured colonies contrasting with the yellow background of the medium allows unambiguous identification. 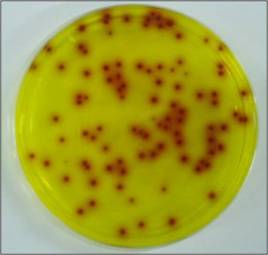